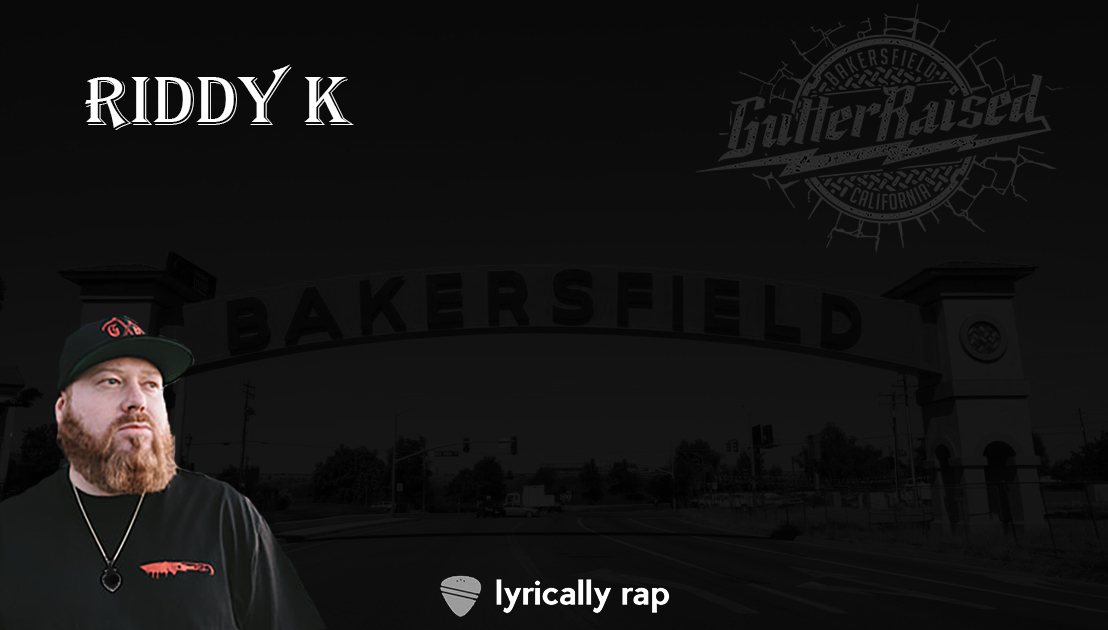 I love getting my mind right and finding new music to vibe out to. In fact, that’s most of what I do here at LyricallyRap. Rough gig right? Recently I had the pleasure of coming across an artist named Riddy K and could not stop listening.

His voice and delivery are perfect for his flow. His artistry is fully developed and it shows.

Thats love and I couldn’t agree more. I’m fortunate that I was able to talk to Riddy and to help him spread his unique sound to as many people as possible, and trust me he has some serious talent. Mark my words, this dude is about to blow up bigger than Hiroshima! Lets learn a little more about this artist after yall watch his latest release.

Riddy K, real name Richard King, grew up in a very desperate situation in Bakersfield, CA where he had to endure many hardships. He grew up in low class, drug riddled neighborhoods with a single mother and three siblings, exposing him to harsh realities at a very early age and landing him in foster homes, juvenile detention centers, and group homes for a large portion of his childhood. Feeling lost and longing for home he would escape through music.

I first got into Hip Hop watching MTV as a kid, Tupac, Dr Dre and whatever else they played. Then my older brother would always bump artists like Bone Thugs N Harmony and Beastie Boys, then Eminem dropped when I was in a foster home. I would go to swap meets while in a group home and spend my allowance on CDs, I remember buying Snoop and EM albums back then. Around 18 I got into Tech N9ne and a lot more rap as well. I’ve loved Hip Hop and all kinds of other music my whole life so my influences are very broad.

Notice the featured artist on that one. King Iso is pretty good company and is amazing on that hook. He has plans to do more collaborations in the near future.

I do have some collabs in the works but I can’t really say who until it’s finalized and time to drop. It’s some pretty well known underground names tho.

Riddy released his first solo EP, “The Kronicles of Riddyk” back in 2014, then, “The Dirdy EP”, in 2015 and numerous singles the years after. When i was listening through his library it became clear that he was evolving as an artist.

My creative process has changed over the years. I try not to rush the music now days as opposed to when I first started writing raps in 08 I just worked and worked on it all the time. That really sharpened my skill set and I’m still working to sharpen those, nonstop. All those years of practicing my writing, recording, producing, performing and everything was crucial. You gotta be long term dedicated to greatly improve. I usually smoke a lot of weed (I do that all day tho lol) and either make or find some dope instrumentals from producers I know or find online then I usually try to get a chorus and concept going for the song first to really expand on that in my verses. I sit and ponder/brainstorm all kinds of ideas and concepts and analogies for those concepts and way I can flip it until something hits me that I love. Writing is like a puzzle of words and cadences for me. I try to say what I want to say and be as clever as I can in my delivery of it all in a dope rhythm and rhyme pattern. I’ve been playing guitar since I was around 14 too and currently I’m working on expanding my knowledge on that to incorporate into my music even more. I have produced a few songs myself and my favorite self produced are always my guitar pieces. That in itself is a whole other process. Beautiful thing about music is there is always more to learn and it’s ever changing. There is no end to the possibilities.

Riddy is probably one of the smartest, inspirational and most down to earth artists that I’ve had the pleasure of interviewing. He has some good advice for his fans.

Idk one particular message but I’d say be true to yourself. Get out of your bubble and experience life, diversity, cultures. Spread love not hate. Don’t be so quick to judge, live life to the fullest and appreciate the gift of it. Oh and chase your wildest dreams!! You only have one life, try and live with the least amounts of regrets as possible.

We hope you come to enjoy Riddy’s unique talent as much as we do here at LyricallyRap. You can find his library on Spotify or all other major platforms. We have also added him to our Emerging Lyrically Spotify playlist! Go check him out and show his particular brand of lyrical rap music some love.

You should also follow him on social media to see what comes next from LyricallyRap’s newest Hidden Lyrical Gem!

This @ekohmusic duet with @katoproducer speaks some wicked #truth
Volume 8 of the Fresh Raps Playlist is live! This is one of the best we've put out! Click that link in bio and check it out! Be sure to give it a follow!!
One of the albums that shaped our childhood. Respect the Legends 🐐🐐
Got my ticket to the @kxngcrooked show in Indy. You got yours yet? Make sure to come say hello!
@realvinjay teases song from his new album! Click that link in bio to hear some of em😤😤
Ekoh released his latest album today, and I've written my thoughts through the first listen. Check them out on our web page. Link in bio.