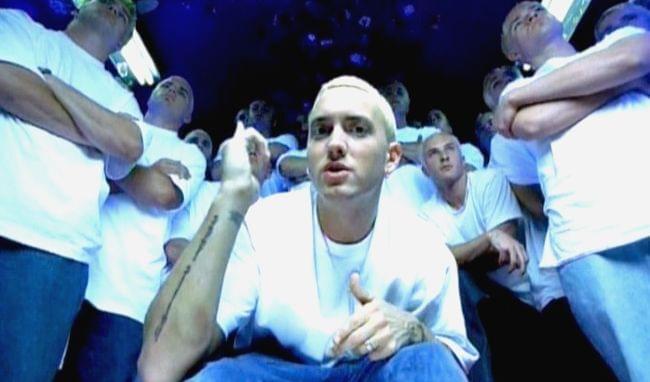 Eminem’s single “Real Slim Shady” dropped TWENTY years ago. That’s nuts. That’s back when Marsh and I were really finding our music sound. Our golden years you could say. “Real Slim Shady” could be a daddy to a lot of these lyrical rap songs coming today. Poppa Shady!

Hell, Eminem is the inspiration and reason why a lot of rappers doing what they’re doing. His sound is legendary. There is a reason why so many try to follow in his footsteps. He knew he was changing the game, even twenty years ago.

And there’s a million of us just like me

And just might be the next best thing, but not quite me

If you get lost in Lyrically Play lists. Or like to listen to Eminem’s radio on Spotify. You’ll eventually get into a space of Emerging Artists who all sound like Slim Shady. It’s a fascinating experience to hear how many artists really do sound just like Eminem. Really are a million of them.

Of all the Eminem clones out there, there’s one who caught my ear. The artist who goes by the name of Denace.

The “Nick Cannon – Eminem” Diss tracks are old news now. We didn’t hear a response, but so what. Eminem doesn’t really need to respond. If you’ve heard the tracks, you already know.

But I was listening to a random lyrical rap radio playlist on Spotify, and there was Eminem’s voice. At least I thought it was his voice. I was shook. Was this Eminem responding to Nick Cannon?

Nope, turns it out it was this musician named Denace. Almost like he is acting like Eminem responding to Nick. I don’t know, but I don’t think Slim needs anyone speaking for him.

In trying to keep with positivity though, Denace can actually spit. As much as he sounds like Eminem, he’s still putting out pretty good music.

I’m excited to embrace the sounds inspired by the living legend, Marshall Mathers. I challenge those artists to find their voice, their sound, while keeping it true to all the hip hop legends. Innovate. Create what’s you. Nobody can be the “Real Slim Shady”.

Keep spreading the Lyrically Rap Message. Like our Page, and help spread the word of Good Lyrical Rap Music. We need to get these lyrical rap artists on top of the charts!

Click on our Social Links above and give us a follow. We promise to continue to promote quality lyrical rap music. Thanks for all the support. It means a lot.